I'm not actually so sure that I'd rather be at Oxford than St. John's now. At least at John's I could row on the Cam.

The Isis is wide, so wide that it seems ridiculous that it has a 'gut'. It is picturesque and the atmosphere for Summer Eights must be amazing, racing past the boathouses. But the stream is a bit of an inconvenience, requiring constant spinning and confusing pace data when rowing with it.

The races were run by the City of Oxford rowing club, who, while very hospitable, seemed neither aware of their own rules, nor inclined to follow them, as I'll explain further on:

We were expecting some good racing, a bit of practice on a smaller scale for the Mays. Christ Church were very kind to lend us a boat and blades, but they both took some adjustment. We were expecting to race mostly Oxford colleges and a few town crews, but found ourselves in a clump of Cambridge rowers, with XPress chasing us, and Christs in front of us at the bottom of the first division. I'll try to remember each race:

1. Absolute chaos on the start. Gonzalo had to go off to judge another crew's race and Fordy had forgotten a watch, so I was tasked with counting down. There was a lot of faffing and backing it down as Fordy experimented with the best way to push us off, to the amusement of our judge. We were discussing how late the race was going to be when suddenly all the boats in the lower half of the division began furiously rowing towards us. No one in the top half had heard the 5 minute, 1 minute, or start gun. One of the umpires shouted 'the bottom of the division is revolting!' which is a pretty good description of the scene. The start procedure was then altered so everyone would be able to hear it, but their horn still wasn't a patch on our little cannons.

The idea of possibly rowing 8 times as a sandwich boat did not appeal, so we took a tactical bump. (well, not quite. XPress rowed very well, and we consoled ourselves that, with most of the crew ill, it was better to be down 1 and warm than level and freezing) The masochistic Torpids rules meant we had to finish the course even after being bumped, but at least it felt exceptionally short. Attempting to follow the stream was a bit of an adventure, but Sonya assured us that we took the right lines.

2. After some debate as to whether to camp out at Christ Church boathouse or CORC's, Gonzalo, with his typical persuasiveness, convinced us that it was better to be close to food and transport.
The second race was unremarkable. We wound it very high, into the 40s and didn't settle much below 37. But the race felt sprinty and short, so I didn't complain too much. Though it was meant to be Christ Church W1 chasing us, in a nice bit of symmetry, it ended up being Trinity Oxford instead.
They got to about a length and a half when Charlotte started calling pushes, which Thornton assumed were to prevent imminent bumps. I must admit finding it difficult to summon an unsustainable push to 'escape' from a boat 3 lengths behind us, but it was good for my fitness. We didn't make much of an impression on XPress in front either. More like a very short head race than anything else.

3. By this point we were finally getting used to the boat and blades, and so were less cautious off the start. XPress were tiring from a demanding day and we made up some ground, but not enough to threaten them. Trinity got to a length around the corners, but clipped the bank and fell back in the latter half of the race. There was much jubilation from a riverboat of locals at the finish, on learning from Fordy that we were not Christ Church and that we had not been bumped. I believe there was some sort of wager at stake...

4. We had heard, through the Cambridge contingency grapevine, that XPress had bumped Barnes Bridge. Hopeful of getting a bump ourselves and for once not having to row the whole course, we turned up to our station eager to race. We knew Trinity were planning to go off very hard to try and catch us off the start, but hoped to be able to hold them off long enough.
However, as the minutes ticked away and the 5 minute gun was fired with no sign of Barnes Bridge, we figured we would be treated to a technical bump and a bit of a break. However, when our judge went to check with the chief umpire, he informed us that instead of a technical bump, everyone in the division would be moving up a place and we would have to row over head of the division. We protested, but there was no one else to appeal to and his decision stood. Having gone back to read the rules, they are very clear. Barnes couldn't make the race because someone in the crew was coxing another boat in the same division. Scheduling difficulties should result in a technical bump. There is no mention of 'shifting everyone up a place'.
After a well fought race with Trinity, we slogged it back up to the start line, worried by the dark clouds threatening rain on the horizon.

5. It poured. With everyone damp, aching and exhausted, we decided to go hell for leather in the first two minutes, and if we couldn't make an impression on XPress, to wind it down and row over as the sandwich boat, with no pressure from behind.
However, it looked like this plan was going to be foiled when the same chief umpire called to us that they had given the Barnes crew which had failed to turn up to their own race, the opportunity to have a shot at us, by racing behind us.
At this point I lost my patience with this practice of making up rules as they go along and vowed never to row in Oxford again.
As it turned out, Barnes had enough class not to show up to that race either, and we followed our plan of going flat out. We gained a bit, but fatigue and the mysterious crew illness got the better of us, and we wound it down when it became obvious that a bump was not imminent.
Though this was meant to be our leisurely row-over, this race was the most painful, seeming never-ending as it was so much longer than the others.
We spun a few more times and eventually landed back at Christ Church to half de-rig the boat so that it could fit back on its rack. All in all, an amusing, frustrating, but hopefully ultimately useful day.

Many thanks to Christ Church for generously supplying a boat and blades, to Sonya for letting us in and directing us, and to Gonzalo and Fordy, for spending a day following us up and down the river offering support and encouragement. It would have been miserable without you. (Julia A.) 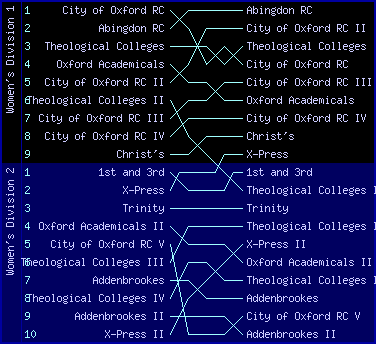